“Oh are so you are a lawyer? …I am going through a nasty divorce at the moment, what would you do if you were in my situation…….?”

“A nurse? Impressive! Would it be inappropriate if I showed you something?”

These are the types of questions people in certain professions may expect. The nurse one is even worded quite politely as people don’t necessary ask, they just show them their problem area… This can happen at dinner parties, social gatherings, through social media, random phone calls etc. etc.

I have friends in different professions, and they have told me it is unbelievable how people from the past pop up and expect help or even free guidance due to old time sakes when it suits them.

This is something I didn’t expect to come with my education. I don’t know why but I just had never given it a thought.

I had interactions with an institution the other day that I have to communicate with quite a lot.

Their general communications are poor. There is a lot they want to achieve but they are definitely not meeting their objectives as they bombard people with messages. Through emails, texts and apps. One day I received 4 emails, 2 texts and messages through the app (it’s not an isolated thing but reoccurring, this just happened on the day I decided to actually count their messages). These different types of communications were not to get one really important message across but many different messages, some rather important, others not important at all.

What this institution has achieved with its invasive communication attempts is that people (including myself) don’t read their messages and therefore, sometimes miss important information.

As I had a meeting with one of the managers of this institution the other day, I couldn’t help myself and pointed out the fact I was studying communications and as far as I was concerned, they were well  off mark in their attempts to reach their audience.

He was very interested and asked what I meant. I pointed out that for an example they had been raising money the other day (which I didn’t know) and then a week later they were still raising money and mentioned that NOTHING had been raised so far as no one had responded. I explained to him that was simply because they were drowning out their own voice.

He told me he liked what I was telling him and asked me what I would advise him. All of a sudden, I found myself on the spot. I realised I was being asked to come up with a quick solution to something I knew one should apply certain methods to and put thorough thought into. I told him that was something that required some thinking and that objectives needed to be clarified etc. He kept pushing me for a solution so I told him my first step would definitely be to reduce the amount of information they were sending out. Try to keep it in their weekly newsletter UNLESS it was something pressing. However, I pointed out he needed to inform the people on the receiving end so that they would actually read the newsletter and realise that was where most things were to be found from then on.

He then told me about other people he wanted to reach and that he needed help to do so and what my advice would be in that regards.

I was gobsmacked. All of a sudden, I was the nurse and the lawyer I never imagined I would become. Being asked for professional advice on the spot. As if people go through years of university to be able to apply quick fixes to people’s problems.

I told him I couldn’t advise him more there and then as for a problem like that one needed to make a stakeholder map and have a clear idea of the objectives for each stakeholder group. I probably should have also told him that consultation like that should also cost money. However, I wouldn’t know what to charge, plus I wouldn’t feel comfortable about that yet as I feel like I need more experience to be able to justify a cheque for my advice.

He asked me if I could do graphics and whether I might want a role within the institution. A voluntary role, a prestige one, but I have the feeling he wants me in that role for easy access to answers to some of the questions he asked me while I had this short meeting with him (that was completely unrelated to this topic!).

I told him I would finish my masters first and then bring a human being into this world. After that we could talk.

This was a wakeup call for me. Of course, we help out close friends and family to a certain extent. However, we shouldn’t give away our work and we should not expect others to do so. Neither should we expect that people that have gone through universities are walking encyclopedias of their trades and can therefore sort out any problem related to their profession on the spot in matter of minutes.

If your sister is a hairdresser pay her a little for cutting your hair and your mate that is an electrician doesn’t feed his family with a drink at the pub later. People should be respected and valued for their expertise and the work behind it should not be taken for granted. 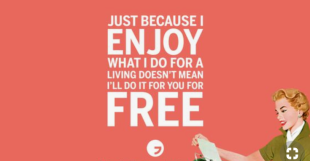